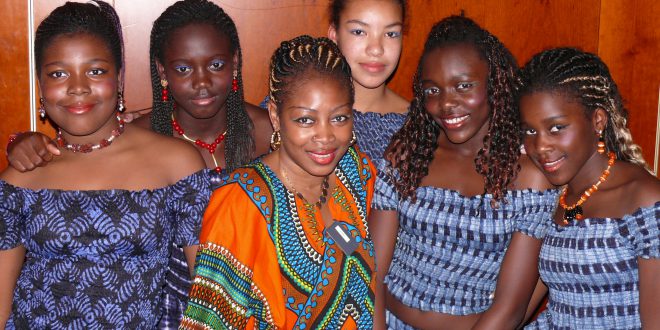 Ibironke Ola-Oni (middle), a Social Worker based in Berlin, and the members of the Afro Tan Edutainment group. She believes that Germany is a country that provides the best opportunity so long as one can integrate into the system / Photo: Private

I am the daughter of the well-known Nigerian human rights activist Comrade Oladipo Ola-Oni. My family originated from Ibadan, Nigeria, and I have been living in Germany since 1992.

In Nigeria I was motivated by the way my best friend spoke the German language. It fascinated me. I developed so much affection for it that my dad applied for me to attend a higher education institution here.  I later came to Germany to study German language and social sciences.

Fortunately, I had a student visa. This made it easier for me to move around to discover things.

However, I later joined the theatre group Shakunle and performed the lead role in Atinuke-the Beauty Queen of Oyo Empire. Owing to its success, we performed in most theatres in Berlin. I was really inspired by this and also discovered my talent for educational choreography and stories.

So I wrote my own script, Tears of Blood. This is a play that was chosen and acted for the Black History Month 2008 at Kulturwerkstatt in Berlin. It depicts the horrible pain women had to go through to be circumcised and our aim was to protest against this practice.

I am the founder of the Afro Tan Edutainment group. It is a group that unites Black women and girls and we gather once a week to dance.

Generally, Germany is a country that provides the best opportunity so long as one can integrate into the system and speak the language. So far, I have enjoyed my stay in Germany because I have been able to implement my ideas as soon as I have been inspired to do so.

My general advice to most Africans is to aim higher than doing mostly odd jobs. They should try to learn the language and aspire to a better standard of living. They should try to visit tourist attractions with their kids. They need to plan and save to travel once a year round Europe with the family. This can help their state of mind.