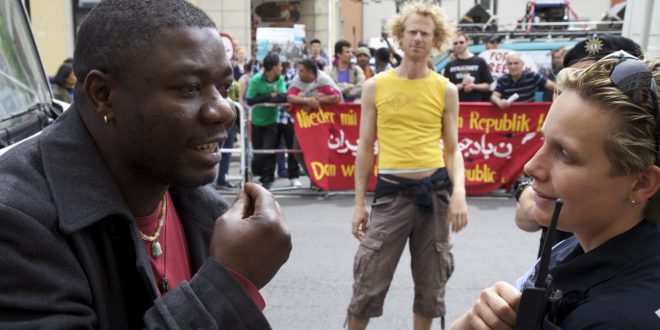 “Originally my ancestors migrated from the area of Africa now called the Democratic Republic of Congo. But my parents and grandparents were born in a West African region, although some call it Central Africa, the present-day southern part of the Cameroonian regions. I was born in the south-western part of this region, although my roots can be traced to the north-western part. I say all this just to identify my African integrity.

“I came to this country 15 years ago and have lived here since then. I hold the principal belief that every human being needs no justification to go anywhere and this is what I still fight for today: freedom of movement. As for my personal history, there are political and social factors that brought me here. I will start with the social one. I came here because of the historical colonial and neo-colonial connections between the Cameroons and Germany. I had a lot of social contacts here. Politically, I was persecuted in the Cameroons after taking part in a strike at my former university in Yaoundé 1, in 1995-96, demanding better studying conditions, especially for English-speaking students. I was arrested and persecuted since then and I had to flee through my social connections. That is how I came to be here.

“I have nearly completed my PhD in Forestry and Forest Development Policy at the Institute of Forest and Nature Conservation Policy in Goettingen, Germany.

“Before coming to Germany, I saw the country as a land of “milk and honey”. Many Africans also saw it that way and still see it as the same today. I thought it was a democratic and constitutional state in which the rights of all people are respected. I thought I would be safe when I came here to ask for political asylum.

“I was very happy when I came here but this suddenly changed after six months. As I said before, I am still studying and this was possible only after I obtained my residence permit here in 2001. As an asylum seeker, I was prohibited from studying or working and was sent to a camp 30km away from the smallest town in the state of Thuringia in the eastern part of the country.

“I am a political activist in The VOICE Refugee forum, a self-organised refugee network. I have no good words for German society. The White majority is complacent about all the misdeeds against foreigners, especially the Black people living here. The deaths of Mariame Saar, Oury Jalloh, Laye Alama Condé, Dominique Kouamadio, Christy Schwundeck (all Africans) at the hands of the German police in inexplicable circumstances are just a few examples.

“The only way to regain our dignity and humanity as Africans is to fight White supremacy and develop our continent, to believe in ourselves and be conscious of our history. I am preparing to go back and stand for my continent. This decision would not have been possible without experiencing this society. My future here is oblique.”

Share
Previous Nigerians point way forward for their country in Hamburg
Next “We need to come together as Africans,” Habte Hadgu