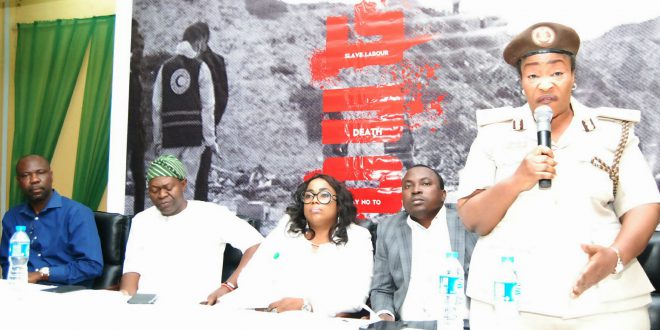 Youths have been advised to properly assess all their options before deciding to travel abroad for greener pastures. The advice was given by Hon. Kenneth Gbandi, president of the Nigerians in Diaspora Organisation (NIDO) Europe, on Tuesday (12 September) while launching the campaign again irregular migration in Lagos.

The Germany-based journalist and media consultant said travelling abroad does not in many cases lead to greener pastures. He called on youths to explore opportunities for career development at home before embarking on any move outside of the country.

“And if you have to travel, please travel legally,” he charged the audience of about 250 young people who attended the official launch of ‘Look before you Leave’, a media awareness campaign being carried out by the Migration Enlightenment Project Nigeria (MEPN).

Gbandi, who is also the director of the African-German Information Centre (AGiC), Germany, and co-project director of MEPN, warned against travelling through the desert to Libya with the hope of crossing the Mediterranean to Europe as it’s a route that has brought tragedy to so many families in Nigeria.

In his project presentation, Femi Awoniyi, explained the objectives of the ‘Look before you Leave’ campaign, which is to promote an increased public awareness of the risks and danger of irregular migration while highlighting opportunities for legal migration.

The project was conceived by the AGiC and The African Courier Verlag, Germany, and is being implemented in co-operation with the German chapter of NIDO with the support of Germany’s Federal Ministry of Foreign Affairs.

“The campaign works with the Nigerian media to sensitize society to the problem of irregular migration and the enormous costs that families and the nation pay,” Awoniyi, co-project director of MEPN, said.

“Behind the figures of drowning in the Mediterranean and agonizing deaths from dehydration in the desert are personal stories of tragedy and sorrowful ordeals for wives, children and families left behind.”

Awoniyi, who is also the publisher/editor-in-chief of The African Courier, a bimonthly magazine published in Germany since 1998, said the campaign also highlights the opportunities for legal migration as well as encourage youths to look at positive alternatives to migration in their life’s plan.

“Many of the irregular migrants could in fact qualify to study in Europe, an option that many don’t consider. Moreover, there’re work visa schemes, such as the EU Blue Card and similar national schemes in the bloc, which provide a legal route for labour migration to Europe,” he pointed out.

He advised youths against undocumented travel, warning that “the illegal route to Europe is littered with hardship and death.”

Kenneth Alaekwe, President of NIDO Germany, said the Nigerian Diaspora could no longer keep quiet on the issue as it would amount to cold indifference to the suffering of other Nigerians.

In an address, entitled “Enough of Deaths in the Sea”, which was read on his behalf by Mrs Mary Bamgbele Bruder, Treasurer of NIDO Germany, at the event, Alaekwe called on youths to follow the proper and legal routes when seeking greener pastures abroad.

Bruder also talked about her persnal initiative Bruderhilfe, which supports self-empowerment of youths in Nigeria. She called on governments, non-governmental groups and individuals to devote more energy to creating opportunities for youths in the country.

Among those who also spoke at the event are Alhaja Sadat Hassan, Deputy Controller of Immigration at the Nigerian Immigration Service; Honourable Rita Orji, chairperson of the Committee on the Diaspora at the Federal House of Representatives; Mr Kolapo Abiodun, Managing Director of the Lagos-based printing company Multi-Act Ltd; and Pastor Kayode Obembe, a real-estate developer in Lagos.

In a moving speech, Alhaja Hassan, who was the head of immigration at the Nigerian Embassy in Berlin for five years, recounted her personal experience of the suffering of Nigerian irregular migrants in Germany. “We talk of the dangers of travelling illegally to Europe but the bigger problems such migrants face start when they arrive in Europe,” she pointed out.

The immigration officer said many Nigerians were going through hell because of their lack of legal status in Europe and at the end of their ordeal get deported back home empty-handed.

Mrs Hassan advised youths to desist from travelling out illegally as it most often derails their lives.

Hon. Orji narrated her own experience of the suffering of many irregular Nigerian migrants all over the world through the cases that are regularly referred to her office.

The federal legislator, who represents Lagos in the House, talked about cases of Nigerians whose organs were illegally removed in foreign countries and sold to treat other patients. She singled out the case of a Nigerian woman in Italy whose kidney was removed without her consent simply because she’s an irregular migrant and the efforts she personally made to get justice for the woman.

Orji called on Nigerian youths to realise that there’s nowhere like home to make it in life and begged young people to invest their hopes and energy in the future of Nigeria.

The event featured presentations by youths who returned to the country from Libya after their failed attempt to cross the Mediterranean, recounting the enormous suffering they went through.

Pastor Obembe and Mr Abiodun advised youths to explore opportunities at home for self-actualisation and that the most important condition for success is their determination to succeed. Abiodun said there’re skills that youths can learn that guarantee them a sustainable source of income for their livelihood. He talked about the printing press which he described as a sector that will continue to grow as the population grows.

By enlightening young Nigerians on the dangers of irregular migration, the ‘Look before you Leave’ campaign, which will run until the end of the year, aims to save lives and reorientate youths not see migration as the only option for self-actualisation.