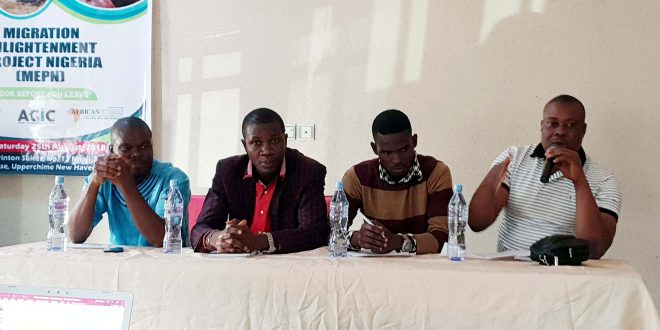 While the focus of awareness campaigns have been on the travails of those journeying north to Europe through Libya, Nigerians travelling by land irregularly towards South Africa are also suffering hell.

That was the revelation made by Dr Kingsman Chikelu, Chairman of the Africa chapter of the Nigerians in Diaspora Organisation (NIDO) in Enugu on Saturday at the Stakeholders’ Roundtable Dialogue on Migration.

Speaking at the event – a forum for consultation with civil society on irregular migration organised by Migration Enlightenment Project Nigeria (MEPN),  the Democratic Republic of Congo-based medical doctor, said thousands of young Nigerians travelling without visa by land in the direction of South Africa go through indescribable ordeal.

“Many have fallen victim to the several violent conflicts in Cameroon, Central Africa Republic and DR Congo,” he revealed. “They were simply caught up in these wars. Many are forced to fight for one side or the other ending up dying for causes they neither supported nor understood.”

Dr Chikelu also talked about other hazards faced by Nigerian irregular migrants in Africa, such as being exhorted by criminals and police and trafficked for forced labour and sexual exploitation. “Many are detained for lacking legal travelling documents for long periods of time in the transit countries as well,” he revealed.

And those who finally make it to South Africa after many months of suffering face difficult living conditions, unemployment, xenophobic attacks and criminal violence, Dr Chikelu said.

Chikelu praised MEPN, a diaspora initiative supported by Germany’s Federal Foreign Affairs Ministry, for initiating the awareness campaign as it had become important to enlighten youths on the dangers of irregular migration.

The Kinshasa-based private medical practitioner criticised traditional rulers in Nigeria who give out chieftaincy titles to indigenes who return after a short stay abroad with unexplainable wealth. He identified this practice as one of the factors driving irregular migration as the titles legitimise such illicit wealth, sending a wrong message to society and especially young people.

Chikelu pointed out that those who return from abroad with illicit wealth actually amount to less than 1 per cent of those who had travelled out. “Take South Africa, most of the Nigerian migrants there are stranded, not wanting to return home empty-handed and simply staying put against all odds,” he explained.

Dr Chikelu reminded youths that Nigeria was the biggest economy in Africa, offering many opportunities to those who were creative and daring. “So, my advice is whoever is considering travelling out for opportunities should first look well at home before venturing outside the country,” he said.

Dr Chikelu assured the directors of MEPN that NIDO Africa would help spread the message of the campaign through its members across the continent.

Another speaker at the event, Engr. Prince Nwankwo, spoke on how to start a small business, advising youths to make sure that there was a market for their ideas. “A good entrepreneur does not find customers for their products but creates products for their target customers,” he admonished.

Nwankwo, a lecturer at the Anambra State Polytechnic Oko and a serial entrepreneur himself, emphasised the need to conduct a sound market survey before deciding that a product or service will be received well in the market.

He also advised that would-be entrepreneurs should write a business plan which if done well would reveal the viability or otherwise of a venture. “It would also help to convince prospective financiers that they could invest in the business”.

Moreover, Nwankwo spoke of the need to position a product or service appropriately in the value chain while ensuring that the business is properly located. He provided information on how young entrepreneurs could get free training and financial support.

In his welcome speech at the event, Hon. Kenneth Gbandi, Chairman, Nigerians in Diaspora Organisation Europe (NIDOE), said the aim of the MEPN, a diaspora initiative, was to save lives as Nigeria could no longer afford to ignore the enormous costs that irregular migration was exacting on the nation.

He did a PowerPoint presentation on the risks and dangers that irregular migrants face and called on young Nigerians to adopt a realistic approach to migration.

Gbandi, who is also a co-director of MEPN, warned would-be migrants against the typical lies of people smugglers. He explained that only persons who had suffered political persecution in their homelands could be granted asylum in Europe, emphasising that Nigeria was not considered by EU countries as a place where there is political persecution.

Gbandi, who is the Director of African-German Information Centre in Hamburg which is implementing the awareness campaign in partnership with The African Courier Publishers, Berlin, pointed to the fact that more than 30,000 Nigerians were currently awaiting deportation in Germany meant that asylum seeking was not a viable route to legal residency in the country.

Femi Awoniyi, Publisher of the Germany-based The African Courier magazine and co-director of MEPN, talked about the opportunities of studying and receiving training in Germany, whose public universities charge little or no tuition fees. He listed other advantages of studying in Germany and advised young Nigerians to explore education opportunities in the country.

The Stakeholders’ Roundtable Dialogue on Migration – which commenced in Abuja on 18 August – will hold also in Lagos (8 September) and Benin-City (15 September).

The consultative forum seeks to engender a better understanding of the many sides of migration with the ultimate objective of putting an end to the unnecessary suffering and deaths of young Nigerians who are misled into irregularly migrating to Europe.

More information about the Migration Enlightenment Project Nigeria at: http://lookb4uleave.info/