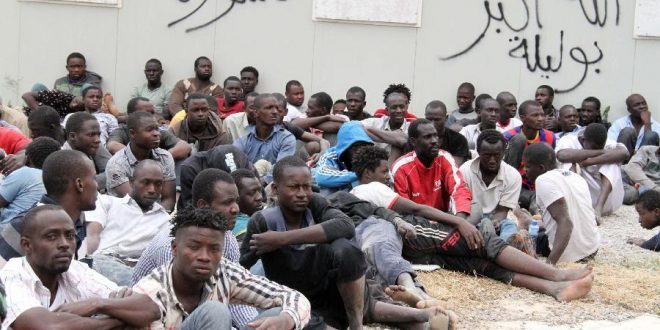 Sub-Saharan African migrants in a detention centre in central Tripoli, Libya. Some spend up to 4 years in such facilities, where, according to international organisations, they have to endure appalling living conditions and severe human rights abuses / Photo: Courtesy of RNI

Policies aimed at reducing the number of migrants arriving in Europe across the Mediterranean from Libya are trapping refugees in the country where they’re exposed to harsh living conditions and widespread human rights abuses, group warns.

Would-be Nigerian migrants have been advised to avoid Libya due to recent developments in the North African country. The advice was issued in a press statement released by the Migration Enlightenment Project Nigeria (MEPN) on Wednesday (11 October).

The group, which is currently carrying out an awareness campaign in Nigeria, pointed to recent developments in the Mediterranean basin that have made the situation of irregular migrants more precarious.

The MEPN pointed to policies aimed at reducing the number of migrants arriving in Europe across the Mediterranean Sea, including increasing co-operation with the Libyan authorities to reduce migrant departures from the country’s coasts.

Among the developments, which the MEPN deems unfavourable to migrants, is the hostile attitude of Libya’s UN-backed Government of National Unity to the activities of NGO rescue ships, which have to seek official permission before entering Libya’s waters to carry out rescue operations since August. This means less search-and-rescue missions for capsized boats and increasing fatalities among those crossing the Mediterranean on these boats.

Moreover, “increased European cash aid to many Libyan coastal towns has enabled them to clamp down on the activities of people smugglers,” the MEPN said in the statement.

“All these developments are pushing migrant smugglers into taking more dangerous routes with smaller, even more overcrowded boats,” the group said. According to international organisations, even though the number of migrant arrivals in Italy has dropped sharply, the number of drowned migrants has proportionally increased, the MEPN pointed out.

The group said travelling to Libya has become even more dangerous due to an ongoing internal conflict in southern Libya as two indigenous Saharan tribes, the Tuareg and Tebu, are in the midst of a yearlong battle for control. The breakdown of law and order in the region leaves thousands of migrants swept up in chaos, “not to mention that the country as a whole is still contending with ISIS and other radical extremist groups”.

“In view of the foregoing, migrants leaving for Libya now would be toying with their lives. The irregular route to Europe is dangerous enough but it has now become more lethal,” the MEPN warns.

The MEPN, which is currently carrying out an information campaign ‘Look before you Leave!’ to promote an increased public awareness of the risks and dangers of irregular migration in Nigeria, added that the ongoing developments are trapping migrants in Libya, where they have to endure harsh living conditions and are exposed to widespread human rights abuses.

International organisations estimate that between 800,000 and 1 million migrants are in Libya waiting to make the dangerous crossing to reach Europe across the Mediterranean.

This year alone, according to the International Organisation for Migration, more than 2,550 migrants have drowned in the Mediterranean with many more believed to have died en route.

“The MEPN would therefore like to advise would-be Nigerian migrants intending to reach Europe through irregular routes, such as Libya, to reconsider the journey,” the MEPN said.

MEPN was conceived by the African-German Information Center, Hamburg, and The African Courier Verlag, Berlin, and is being implemented in co-operation with the Nigerians in Diaspora Organisation Germany and the support of Germany’s Federal Ministry of Foreign Affairs.