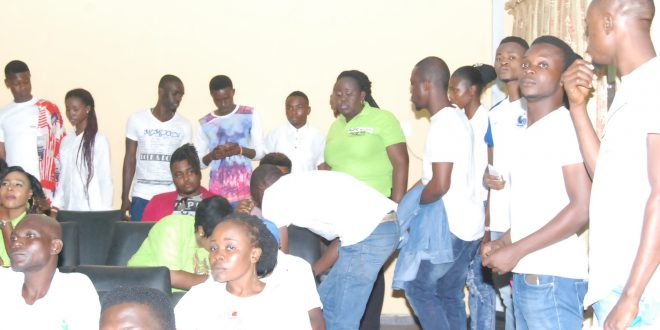 A section of youth participants at the Press Conference/Project Launch of the of the Migration Enlightenment Project Nigeria in Lagos on 12 September 2017 / Photo: MEPN

Femi Awoniyi** on ‘Look before you Leave!’ an information campaign by the Migration Enlightenment Project Nigeria (MEPN) to raise awareness of the risks and dangers of irregular migration.
——————————————————————–

We receive daily news of the suffering of young African migrants seeking better opportunities in Europe through illegal routes. The ordeal that many go through either in the transit countries such as Niger and Libya or during the perilous journeys on rickety boats across the Mediterranean is heart-wrenching.

This year alone, more than 2,500 migrants have perished in the Mediterranean, according to the International Organization for Migration. Many more are believed to have died travelling across the Sahara Desert or in the transit countries.

In Libya, many migrants seeking employment or trapped in transit are exposed to hash living conditions and widespread human rights abuses. Some are traded as slaves for ransom, labour or sex by gangs of human-traffickers and many die in the appalling conditions of detention facilities run by criminals and militias.

A great number of these irregular migrants are Nigerians.

Migration Enlightenment Project Nigeria (MEPN) was conceived by the African-German Information Center, Germany, and The African Courier Verlag, Germany, and is being implemented in co-operation with the Nigerians in Diaspora Organisation Germany with the support of Germany’s Federal Ministry of Foreign Affairs.

This media awareness campaign, captioned ‘Look before you Leave’, is designed to educate would-be migrants in Nigeria about the realities of the journey to Europe.

The campaign works with the Nigerian media to sensitize society to the problem of irregular migration and the enormous costs that families and the nation pay.

Media plays an important role in generating awareness, as it performs its role through dissemination of information. The media also acts as a force multiplier, as the message reaches a larger audience, beyond the immediate target audience.

We journalists need to dwell more on the subject of irregular migration because it’s in the national interest to do so.

Behind the figures of drowning in the Mediterranean and agonizing deaths from dehydration in the desert are personal stories of tragedy and sorrowful ordeals for wives, children and families left behind. Paradoxically, youths and their parents do sometimes sell their properties and close up their businesses to finance irregular migration.

The nation is also poorer for it in many ways as it needlessly loses citizens who otherwise should be agents of national development to irregular migration. Moreover, irregular migration damages the national reputation as well as causes a backlash against legal migration from the sender countries.

The main objective of the campaign is to promote an increased public awareness of the risks and dangers of irregular migration but also to provide tips on how to emigrate legally and where to go for more information.

Our focus is to reach potential migrants in their pre-decision stage of migration, to put them in the picture regarding what documentation is required to travel legally to Europe and to raise awareness of the necessary considerations in all stages of migration.

Some of the reasons for irregular migration include high unemployment rate and the perception that migration is the best alternative.

Many of the irregular migrants could in fact qualify to study in Europe, an option that many don’t consider. Moreover, there’re work visa schemes, such as the EU Blue Card and similar national schemes in the bloc, which provide a legal route for labour migration to Europe.

“For people wishing to study in Germany, it is not difficult to get a visa. It is easier than you think. It requires filing the details or you can just go to our website,” he advised.

And in many cases there’re positive alternatives to emigration in Nigeria such as learning technical trades that can lead to lucrative paid employment or self-employment.

For example, practical skills in solar technology are sorely lacking in Nigeria and young people who acquire qualifications in this field are assured of lucrative jobs as the trend is now towards sustainable renewable energy.

Most irregular migrants leave Nigeria lured by the false promise of people-smugglers who deceive their victims into paying sometimes thousands of dollars for a supposedly easy journey to Europe.

The fact is, there is no easy passage to Europe through irregular migration.

The illegal route to Europe is littered with hardship and death.

It is critical that potential migrants are aware of the facts behind European immigration policies before risking their lives.

A new phase of struggle awaits those who survive the journeys through the Sahara Desert and the Mediterranean. It’s the struggle to obtain legal residency.

For example, most Nigerians who seek asylum in the European Union will have their application rejected.

There’re currently 12,000 Nigerians awaiting deportation in Germany as their asylum claims have been rejected because Nigeria is not considered a country where there is political persecution at the moment.

“Think of Nigeria the way you want but there is no political persecution here. The likelihood that most of these absurd applications will be rejected is almost 90 to 99 per cent,” German Ambassador Bernhard Schlagheck, stated in July 2017.

Ambassador Schlagheck made the statement in Abuja when the House of Representatives Committee on Diaspora led by its chairman, Hon. Rita Orji, visited the German Embassy on oversight functions.

Most irregular migrants, after failing in their asylum bid and not wanting to return home after all the troubles they had taken to reach Europe, end up becoming undocumented migrants, who are susceptible to exploitation, prone to crime and at the risk of nervous breakdown or other debilitating illnesses associated with extreme stress.

The “Know the Facts” campaign therefore aims to discourage people from irregularly migrating to Europe by encouraging them to take a proper look at all the options available to them.

Look before you leave!