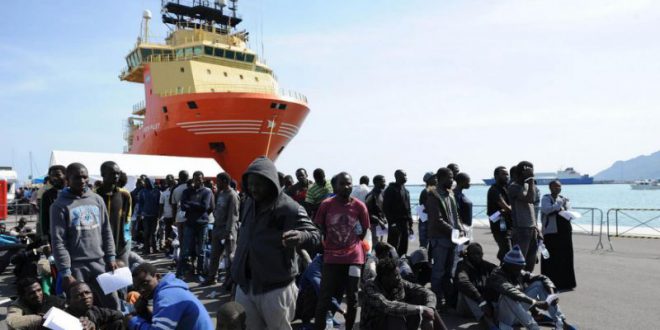 Some of the 375 migrants rescued on 5 November in the Mediterranean. Spanish warship Cantabria brought the migrants to Salerno, Italy. The remains of the 26 Nigerian women who drowned on that day were brought as well to the port city after they were found in the Mediterranean Sea / Photo: Pietre Vive/ Tempo Perso

Reacting to the death of 26 Nigerian women who drowned in the Mediterranean on 5 November 2017 and the CNN video report showing Nigerians being traded as slaves in Libya, the Migration Enlightenment Project Nigeria (MEPN) has called for tougher laws against human trafficking to bring “the needless deaths to an end”.

The MEPN is currently carrying out an information campaign ‘Look before you Leave!’ to promote an increased public awareness of the risks and dangers of irregular migration.

“The MEPN, while commiserating with the families of these women, would like to call the attention of government and society to the seemingly endless losses of Nigerian lives caused by irregular migration,” the press statement, signed by Femi Awoniyi and Kenneth Gbandi, co-project directors, said.

“At least 13,000 migrants, many of whom are Nigerians, have drowned while attempting the passage across the central Mediterranean since 2014, according to the UNHCR. Many more are believed to have died en route.”

The group said the latest tragedy was a wake-up call to governments to adopt policies to tackle the problem of human trafficking, which the MEPN says was being run by “powerful cartels that have connections both in Nigeria and abroad”.

The statement further noted that “while unemployment and the desire to seek greener pastures abroad are some of the motivating factors leading young people to migrate irregularly, human traffickers, employing deception, play a major role in the ongoing crisis”.

The MEPN referred to a study published in November 2017 by Rome’s Link Campus University and the War and Peace Studies Centre, which reveals that about 70 per cent of migrants, of whom Nigerians constitute the biggest national group, who arrived on Italian shores in 2017 from Libya were victims of human trafficking.

“The activities of human traffickers does not end with deceptively promising their unsuspecting customers an easy passage to Europe but increasingly include taking their hapless clients directly into the trap of kidnappers in the transit countries especially Libya,” the MEPN said.

“There have been several published reports this year alone on how thousands of sub-Saharan migrants are held for ransom in abysmal conditions – facing torture, exploitation and abuse, by criminal networks. Detained migrants are asked to buy their freedom by paying up to US$5,000 per person. The victims are compelled with violence to call their relations in Europe and Nigeria to pay the money.”

The group explained that these ransom monies are paid into the accounts of members of the gangs in Europe and Nigeria and those who are unable to buy their freedom are subjected to forced labour, sexual slavery and torture. Many victims are said to die in the process.

“It’s now time to enact tougher laws targeting people traffickers as their crime is akin to that of kidnappers in Nigeria. Perpetrators deserve to be sentenced to jail terms without the option of fine,” the MEPN said.

“Human traffickers, who have no regard for human life, have led too many innocent Nigerians to their untimely death. It’s time to put a stop to the activities of these criminals,” the statement concluded.

MEPN is being implemented by the African-German Information Center and The African Courier Verlag in co-operation with the Nigerians in Diaspora Organisation Germany and the support of Germany’s Federal Ministry of Foreign Affairs.