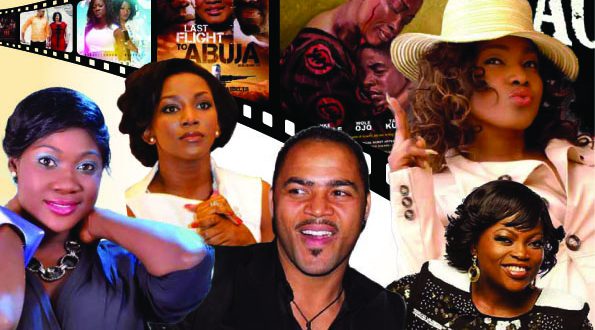 Femi Awoniyi on how the Nigerian film industry created a new popular African art form in only twenty-five years.

“Africans are not banished to the margins of narrative or subsumed in landscape. Rather they become the movers of our story. Their humanity is not negotiable; it is not in the story teller’s gift to bestow, to withhold or to grant grudgingly.”

It all started by chance in the Nigerian metropolis of Lagos twenty-five years ago. An importer of blank video cassettes had so much of the good in stock that he didn’t know what to do with them. A jobless young graduate of film/TV production had been dreaming of making a film but had no means for more than three years.

Providence brought the two men, Kenneth Nnebue and Okechukwu Oguejiofor, together and the result was a film shot with a video camera.

Made with a budget of 150,000 naira (then about US$1,000) and within two weeks, Living in Bondage was copied on video cassettes and released to the market in Nigeria on 12 September 1992.

Twenty-five years on, Nollywood, with the production of more than 2,000 feature films annually, has overtaken America’s Hollywood and become the second biggest movie industry in the world after India’s Bollywood, according to a global cinema survey conducted by the UNESCO Institute for Statistics. This is a huge achievement.

There was indeed an African cinema before Nollywood and it still exists parallel to it, but it’s not entirely African. In most cases, the movies are made with the financial support of European institutions which of course exercise enormous influence over their content and message.

Moreover, with the dwindling support from foreign sponsors, the number of films made in Africa for the big screen had started dropping in the early 1990s about the time that Nollywood emerged.
The Nigerian film industry, churning out a robust volume of independently financed and low-budget productions, thus deals with the issues of cultural identity and economic independence, said UK-based researcher Oluyinka Esan. “On both counts, Nollywood continues to be seen as contributing to the fight against cultural imperialism in tangible ways.”

As African stories told by African voices, Nollywood films, produced either in English, Hausa, Igbo, Yoruba or other Nigerian languages, reflect the realities, conditions, concerns and identities of the people for whom they are made. Idrissa Ouédraogo, the well-known film producer and director from Burkina Faso, once said that with Nollywood a cinema that reflects the reality of many of its viewers had been created in Africa.

And the revolutionary thing about Nollywood was that it shows that with a small budget you can tell a big story. International media analysts even say that the digital video recording of Nollywood is a leap forward that foretells the future of film industries worldwide.

Nollywood films are watched across Africa and in the Caribbean and United Sates and also in the worldwide African Diaspora communities. Nollywood has thus created a true mass medium for continental and Diaspora Africans in the 21st century. That the feat was achieved against the background of poor infrastructure and without institutional support, be it local or foreign shows the resilience and the boundless ingenuity of Africans, says media expert Linus Idahosa.

Nollywood’s example has been followed across Africa. There is Riverwood in Kenya, Camwood in Cameroon, Ugowood in Uganda, Ghollywood in Ghana, Jollywood in South Sudan etc.
With this development, Africa is taking back the right to tell its own story.

Western produced cinema never had a good place for Africans or Black people.
Even when a film is about Africa, Africans are relegated to the background or their problems become the main focus in a way that demeans their humanity.
Western media generally portray Africa either badly or negatively. The continent is associated more with conflicts, crises, famine, war, disease, catastrophes, etc.

Hence, whenever Africa is mentioned, it conjures up frightening images in the minds of media consumers.
One of the adverse systematic consequences of such negative portrayal of Africa is the disillusionment of Africans themselves, rendering them incapable of coming to grips with the challenges that they face.

One could boldly say that Nollywood and the other African “woods” have become an important actor in the process of decolonisation of the African mind. They illustrate the potential of the African cultural strength. And as an agent for Pan-Africanism, Nollywood and its counterparts foster positive inter-cultural exchange, shed light on differences in order to highlight our similarities in Africa.