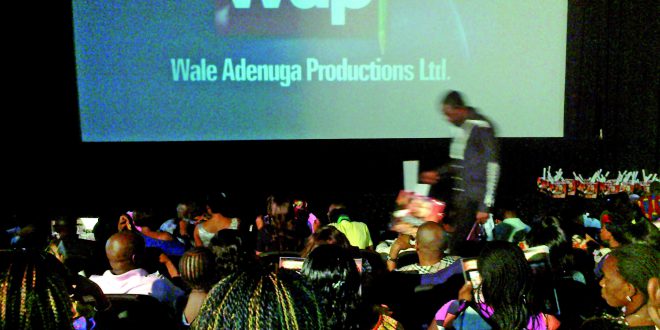 Nollywood producers have also learnt to broaden their revenue base and beat the pirates by showing their films in cinemas and largely recouping their investments before releasing the movies on the market on Video CDs and DVDs / Photo: © Bic Leu

Bic Leu* on how the Nigerian film industry is creating new distribution channels to circumvent the pirates, who deny practitioners of the revenue legally due to them.

The domestic and international media have been buzzing about the emergence of a New Nollywood. A wave of recent features – including Kunle Afolayan’s The Figurine and Chineze Anyaene’s Ijé – flout traditional Nollywood conventions such as low budgets and poor production values, and eschew the Nigerian film industry’s straight-to-video format for exhibition in cinemas only. It appears that there is a new vigour among filmmakers to tackle the rampant piracy and poor distribution linkages that have plagued the industry.

Beyond piracy
Pirates have usurped Nigerian filmmakers’ profits at the end of the distribution chain for years by replicating and distributing films within days of VCD/DVD release. According to late writer and director Amaka Igwe, “Piracy makes up 82 per cent of the Nigerian market.” However, she identifies the real problem behind revenue generation as distributors’ ignorance about market supply and demand: “If people had a choice of buying the real copy, they would buy it, but they can’t find it.”

Igwe laments that distributors often print fewer copies than what the customers demand in fear that surplus inventory will remain unsold. As a result, pirates fill the gap with illegal copies.

Revitalizing cinemas
Other filmmakers have turned to cinemas. Kunle Afolayan’s Irapada (2007) was the first Nigerian film to be shown at Lagos’s Silverbird Galleria. Instead of relying on the traditional system in which the marketer serves as the production’s main funding source, Afolayan subsidised his budget by negotiating product placement deals – which recouped 50 per cent of expenses before the film’s release.

Irapada went on to gross over N5 million (then 25,000 euros) at the box office and changed the industry’s perception of cinema release, a custom that had died out in the 1980s along with celluloid filmmaking in Nigeria.  Afolayan also screened the film at small venues such as the National Arts Theatre as well as campuses across the country.

Afolayan expanded Irapada’s distribution model when The Figurine premiered in 2009. On top of the cinema release and product placement, The Figurine was one of the first Nigerian films to tour the international festival circuit, gathering critical acclaim in Berlin, New York, Rotterdam, Tarifa and Kampala.

Afolayan’s equal mix of the artistic and the commercial attracted audiences to cinemas in record numbers. He claims: “Many people who weren’t cinema-goers started going to the cinema because they were interested in seeing the film.”

The Figurine raked in N30 million during its eight-week theatrical run and was recognised as the most successful Nigerian cinema release at the time. On the back end, Afolayan has experimented with new distribution schemes.  When Irapada was distributed on DVD, Afolayan enlisted the help of a China-based disc replication firm for the encryption, which he believed “cut out piracy by 80 per cent”.

If Kunle Afolayan re-introduced cinema culture to the Nigerian audience, then Chineze Anyaene cemented its viability with her directorial debut, Ijé (2010). The film made N50 million at the box office in 2010, thus displacing The Figurine as the highest grossing Nigerian cinema release of all time.

A grassroots approach
Veteran director Tunde Kelani is thinking beyond cinemas. Recognising that most Nigerians cannot afford the average N1,000-N1,500 cinema ticket price in the few functioning multiplexes in the country, Kelani is looking for more accessible alternatives.

On top of the regular cinema circuit, he worked with the Lagos State Viewing Sports Centre Association and used their 700-1,000 viewing centres to show his film Ma’ami (2011), whenever there is a free slot in the programming schedule.

With an average capacity of 100 seats per centre, Kelani reached at least 70,000 Lagosians by the end of Ma’ami’s release – although this conservative estimate doesn’t account for multiple screenings per centre.

Kelani already proved the success of this method in 2009 when he reached more than 2,500 people in 57 local councils at free outdoor viewings of his film Arugbá. He attracted sponsors to cover the costs for Ma’ami helping him accomplish his goal of capturing “the masses”.

A high-tech distribution solution?
The internet is also becoming a viable option for distributing Nollywood movies. In December 2010, telecommunications giant Glo joined its counterpart MTN in giving their subscribers access to DStv Mobile, a service that enables users to watch DStv live on their mobile devices. Available programming includes the Africa Magic movie channels that broadcast a never-ending rotation of Nollywood films.

Supporting this new internet platform are two international submarine cables that were landed in Nigeria in 2009: Main One, operated by privately owned Main One Cable Company, and Glo 1, operated by Globacom. The cables link Lagos to Europe and other West African countries with the goal of providing affordable and high-speed internet services across the continent.  Main One commenced commercial services in July 2010 and Glo 1 followed suit in October 2010.

The World Wide Web has the potential to become a virtual Idumota Market, though with a more manageable distribution chain than the real Lagos bazaar. The New Nollywood may not need to look beyond its laptop to reach the masses both near and far.

Ultimately, the defining trait is innovation since piracy has become a catalyst for reinvention. Rather than fight in the trenches, filmmakers are sharpening their business sense, creating models for exhibition and distribution that demand rebranding of the industry precisely because up-and-coming Nollywood fits in a future that, for now, is still running to meet itself.

* Bic Leu, an American scholar, researched the social impact of Nollywood as a US Fulbright Fellow at the University of Lagos from October 2010 to August 2011. She recorded her observations at www.findingnollywood.com.