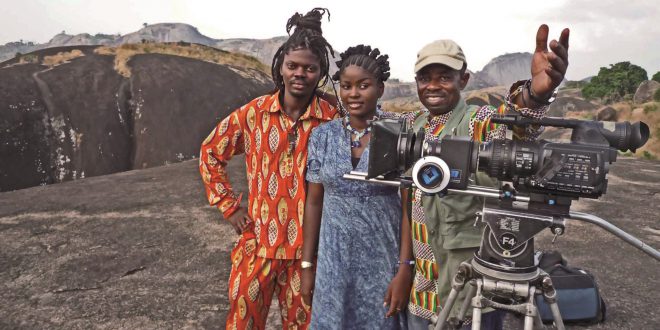 Tunde Kelani directing on the set of Ma'ami (2011). The cinematographer is one of the most talented directors in Nollywood / Photo: © Bic Leu

The Nigerian film industry has been described as a phenomenon, an original African invention that has taken the world by storm. How did it all begin? Sunny Okim, one of the first set of Nigerian journalists to focus on Nollywood, traces the history of the movie industry.

Some 25 years ago, a young Nigerian university graduate was so desperate to produce a movie that he was willing to give it a try with just the equivalent of a US$1,000. Faced with the reality of his lack of money to hire accomplished actors and actresses, Mr Nollywood, as Okechukwu Oguejiofor has come to be known, simply gathered some of his friends and rented a hand-held video camera, with which he recorded the scenes as they acted out a script containing a story written in his native Igbo, one of Nigeria’s three major languages.

After seven days’ work, Oguejiofor spent the next one week inside one of the three privately owned mini-editing suites in Lagos, Nigeria’s commercial hub, trying to put together the rushes. The end product was a videocassette containing a 120-minute movie entitled Living in Bondage. The movie, which was sub-titled in English, became an instant hit when it was released on the market on 12 September 1992. And with that was born the phenomenon that has become known as Nollywood.

Oguejiofor, now in his early 50s, had trained as a filmmaker/television producer at the Television College in Jos, north central Nigeria. He moved to Lagos after completing his course in 1987 with high hopes of securing a job with the government-owned NTA television network, only to see his hopes dashed by an employment embargo.

In the next few years, Oguejiofor took up various demeaning jobs, including street hawking of beauty products, from which he hoped to save enough money to produce a movie. That, however, was a tall ambition for Okey, as he is fondly called – until a chance meeting with a popular television actress saw his dream become a reality.

Mr Nollywood told The African Courier: “Saving that amount of money from street hawking turned out to be a mirage. I was on the street for about three years until one day when I went to the National Arts Theatre, where I used to go and while away the time in the company of some artistically inclined young men and women, mostly unemployed graduates. This very day, I met a group of dramatists rehearsing a play called Vices. I noticed some technical flaws in the play and pointed them out, to the annoyance of the actors. But the director listened to me and realised my observations were correct. He quickly made amendments. The entire cast and crew wondered who the hell this haggard-looking young man was that knew so much about what they thought they were doing as professionals, even to the extent of his being their critic.”

Oguejiofor continues the interesting story: “One of the ladies among them, Ruth Osu, a known face on television then, called me aside and asked to know more about me. I told her I was a trained filmmaker but because of the lack of a job, I took to hawking in traffic in order to make enough money someday to shoot my film. She was moved with compassion, and gave me a note to Kenneth Nnebue, chief executive of NEK Video Links, a major marketer of imported blank video and audio cassettes.”

That connection was to be fortuitous both for Oguejiofor and Nnebue, who had a stock of unsold blank video cassettes and did not know what to do with them.

“After much probing and screening, Nnebue reluctantly accepted my proposal of shooting a movie with a budget of 150,000 naira (about US$1,000). The result of that agreement was the production of Living in Bondage, which hit historic cash sales of 20 million naira (about $140,000) within the first month of release.”

Though it was not the first Nigerian home video, Living in Bondage set new standards and its release is generally accepted as the beginning of the industry today known as Nollywood.

Prior to Living in Bondage, there were pockets of videos shot on VHS cameras across Nigeria. In the south east, for example, one Solomon Eze, alias Mike Ori Ihedinma, was already producing videos in the Igbo language. In the south west, there were people such as Aromire and even Kenneth Nnebue, who had produced a video in Yoruba entitled Ajeni Iya Mi. The story was the same in northern Nigeria.

So what made Living in Bondage the beginning of a new era in the Nigerian movie industry? “It is all encompassing – the props, locations, directorial ability, production capacity, artistic inputs,” said Halim Mohammed, a veteran Nigerian entertainment journalist and critic.

Before Living in Bondage, the Nigerian film industry was essentially an elitist organisation as it involved the production of films on celluloid, a very expensive venture. With Living in Bondage, filmmaking in Nigeria became democratised, so to speak. Many more people could now participate in the process without first needing a huge financial war chest.

“With the advent of home video production in the country, we now believe in ourselves that we can do it, unlike before when Africans were doing just art movies,” Zeb Ejiro, one of the pioneer home video directors/producers in Nigeria, told The African Courier. “They would go to Europe or North  America, get grants and rush back to shoot movies which appealed only to the elites or were for exhibition at foreign film festivals. Now, with the home video, Africans are more confident than ever before, and it is growing very rapidly.”

From ‘nothing’ to something

At the time Living in Bondage came on the scene, the cinema culture in Nigeria was in deep crisis, mainly due to the then prevailing economic hardship and climate of insecurity that had enveloped the country. People had resorted to acquiring videocassette players with which they watched foreign movies since they could no longer go to the cinema or theatre. But when it came, Nollywood took the theatre and the cinema hall to the homes of Nigerians.

Little wonder why the home videos released on the heels of Living in Bondage also became box office hits. They include Circle of Doom, Taboo, Nneka: The Pretty Serpent, When The Sun Sets, Rattle Snake, Deadly Affair, Day Break, Domitilla, Full Moon, Glamour Girls, Scores To Settle and The Prostitute.

Still, not many experts gave the industry a chance to survive and blossom. This, according to Oguejiofor, is reflected in the name Nollywood. According to him: “The name Nollywood actually came into existence in 1995 when some Americans looked at what we were producing and concluded that it was trash. You see, with what we did, they became afraid and threatened that their own movie industry was going to collapse. It was clear to the world that anybody could actually tell all these big-budget stories by using mere hand-held cameras. Therefore, those leading names in the big theatre and film equipment, production and marketing businesses became jittery that, if this local home video industry in Nigeria should continue, it would kill the big-budget film industry that was sustaining them. So, just like they have been doing to anything that comes out of Africa, they concluded that the emerging home video industry in Nigeria was nothing, not like Hollywood.”

Oguejiofor continued: “So Nollywood stands for ‘Nothing’. It is an acronym for ‘Nothing Wood’. It was actually meant to be derogatory and uncomplimentary. But we decided to claim that nothingness and push it, and today they are wondering how nothing has suddenly turned out to become something that is colonising the entire world.”

Nollywood’s phenomenal rise from the humblest of beginnings to overtake America’s Hollywood and become the second biggest movie industry in the world after India’s Bollywood, according to a global cinema survey conducted by the UNESCO Institute for Statistics published in 2009, is the stuff of legend considering the very low budgets with which the producers work. Whereas it takes millions of dollars to produce a good movie in the United States of America, the average Nigerian producer would be happy to have about $100,000 to work with.

Of course, this paucity of funds impacts negatively on the quality of most of the films. The situation has, however, started to change, as the corporate sector and the Nigerian government have begun to assist with funds for production, training and infrastructural development. Analysts say this intervention was inevitable in view of the huge potentials of Nollywood as a blessing to the Nigerian economy and a global brand with immense public relations benefits for the country.

Funding headache aside, other major problems affecting Nollywood include piracy and lack of organised marketing structures. Things are, however, beginning to look up. Lately, producers have also learnt to broaden their revenue base and beat the pirates – even if temporarily – by showing their films in cinemas and largely recouping their investments before releasing the movies on the market on Video CDs and DVDs.

Frontline producer Madu Chikwendu argued that the complaints people make about Nollywood are merely a reflection of the state of things in Nigerian society. According to Chikwendu, “We talk about piracy. Is it not the same police that we say are corrupt that we will use to arrest the pirates? We talk about bad audio in movies, but remember that there is no electricity and we have to shoot with noisy generators. So, most of the problems of the film industry are actually problems of society at large.”

A lot to celebrate

As Nollywood marks its 25th birthday, the consensus among stakeholders is that there is much to celebrate. “We are doing well,” said Zeb Ejiro, who was quoted earlier. “23 years ago 80 per cent of movies in shops were foreign films. It is a big plus that today, all shelves are graced by locally produced home videos. It has placed us as the biggest country in the world as far as home video production is concerned. We are still growing. It’s evolving. We have not even scratched the surface yet. Nollywood is indeed African pride.”

Indeed, so influential has Nollywood become that it has inspired thriving home video industries across Africa such as Gollywood (Ghana), Camwood (Cameroon), Riverwood (Kenya), Ugowood (Uganda) and the brand new Jollywood, South Sudan’s film industry that is slowly taking shape.

One distinct thing about Nollywood is that, unlike Hollywood and Bollywood, it does not physically exist in any city but is spread across Nigeria, even giving birth to thriving subsectors known as Kanywood (the Hausa Language movie industry in the north) and Yorywood, the Yoruba language variant in Lagos.

“Nollywood is in the air. They can bomb other places because they know where those places are located but nobody can destroy Nollywood. It’s indeed a phenomenon,” said Fidelis Duker, former president, Directors Guild of Nigeria.

Okey Oguejiofor concurred. “Nollywood,” he said, “has come to stay.”

From all indications, it has indeed.

Share
Previous Nollywood at 25! Africa tells its story
Next Future of Nollywood