Home / MY LIFE IN GERMANY / “Never forget where you come from,” Beatrice Onyele 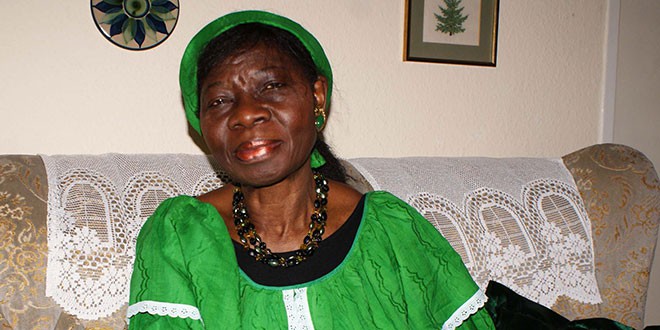 Frankfurt-based retired nurse (aged 75), Mrs Beatrice Onyele, goes down memory lane and she talks about her experiences in Germany since arriving 50 years ago.

“A native of Umuahia (south-east Nigeria), I was born in Calabar and bred in the northern town of  Mada. Following my college education, I qualified as a staff nurse and staff midwife in Iyi-Enu Hospital, Ogidi, near Onitsha (1957-63) – a mission hospital whose motto, “To preach and to heal”, became mine and shaped my life. My mum said that as a child I had always wanted to be a nurse and that it was a noble profession. She was right.

“In 1965, I took an appointment with Shell Hospital in Port Harcourt as a staff midwife. Barely one year later, I had to leave this noble hospital for Germany for family reasons. My then fiancé and later husband was studying in Germany. I had only vague information about Germany; my fiancé had been in Germany for barely a year. But even if I did, “going overseas” in the 1960s was a temptation hardly anyone could resist.

“The weather and language posed a very serious challenge and apart from the Black GIs (American soldiers) in the barracks there were very few Africans in Hanau at that time. I started working as a nurse in Stadt Krankenhaus Hanau barely two weeks after my arrival and was virtually reduced to a ward maid because of language difficulties. During those six months I always went home in tears and wanted to go back to Nigeria, but war was raging in that country and my fiancé was here.

“However, I forced myself to breach the language barrier by always carrying a German-English dictionary with me and had the assistance of our German family friends. Consequently I was able to express myself fairly well in German within a year. Moving to Frankfurt, which was more international, and working in various hospitals (University Teaching Hospital, Red Cross Hospital) helped.

“I went to England (1971-72) and did another one-year course in midwifery in Liverpool. During this time I acquired O levels in English, German, Biology and Human Biology. In 1996, I qualified as hospital administrator (Pflegedienstleitung) in Frankfurt. 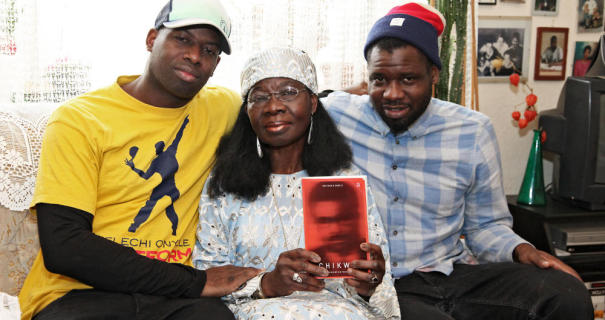 Mrs Onyele, pictured with her sons Kelechi and Chima, holding a copy of her book “Chikwe: Es bleibt ein Traum“. The novel, written in German and whose title roughly translates as “A Forlorn Dream”, chronicles the life of the eponymous Chikwe from a rural community in southeastern Nigeria to the German city of Frankfurt │© Menzel/Amani Verlag

“Seeing our four children (now aged 43, 41, 39 and 32) growing up and raising them to become able young men, and seeing our grandchildren remains my greatest achievement in Germany.

“I have been retired since 2005. However, I am still active as a volunteer. In 2004, I started a programme for children of African descent in Frankfurt – Kinder Afrika Begegnen Ihre Kultur or KABIK.  As the title suggests, it is a forum which aims to impart our culture and heritage to our children. Our programme consists of storytelling, African games, riddles, fairy tales, etc. We talk with the children and listen very carefully to what they say. Racism is no longer taboo in Germany. We know that African children are equally exposed to racism – from kindergarten to the end of their school career. We sensitise the parents towards listening to what their children say when they return from school or kindergarten and assist them where need be.

“I have also been an active member of a German church committee (Kirchenvorstand) of Evangelische Ostergemeide (now Maria-Magdalena-Gemeinde Frankfurt-Sachsenhausen) and a Sunday school teacher since 1990.

“At times one cannot help the feeling of not belonging to German society, as a foreigner, especially Blacks notwithstanding the duration of their residence here. However, German society is opening up gradually and its youth is contributing greatly towards this development, through travelling and mingling with people from different nations and cultures.

“Anyone living in Germany should learn and master the language. It makes one feel more confident and opens ways that otherwise may have remained closed. No matter how comfortable you feel living here, never forget where you come from.

Previous Meet the next reggae superstar!
Next Rupert Neudeck’s last message to the world about Africa